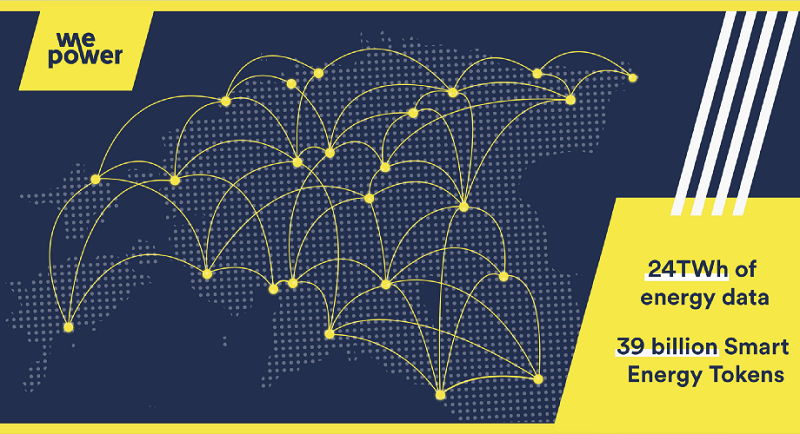 24 TWh of energy production and consumption data uploaded to Ethereum created a total of 39 billion tokens.

The first phase of the tokenisation pilot allowed WePower to validate and verify the logic and processes that will be at the core of the WePower platform: 24 TWh of energy production and consumption data was uploaded to Ethereum, creating a total of 39 billion Smart Energy Tokens. The pilot project tested the limits of the technology, with WePower’s engineers successfully navigating their way around the challenges of uploading such a large amount of real-world data to the blockchain — proving that it was possible. Essentially the company’s blockchain-based energy tokens are digital self-settling power purchase contracts, which each represent 1 kWh of power produced. They are tradable and can also be liquidated into the local energy wholesale market which is achieved by linking digital contracts with power grid data on the blockchain.

WePower received the consumption data from Elering aggregated on the zip code level in order to ensure anonymity of private individuals from a GDPR perspective. The project adhered to the safety and security of supply standards that are obligatory for transmission and distribution system operators.

Kaspar Kaarlep
WePower
Projects of this scale and ambition haven’t been attempted before, in part because of the complexity involved, but also because energy data is highly sensitive. Blockchain is the ideal enabler because its fundamental principle is trust, which can be leveraged to bring revolutionary transparency to the industry. The project will deepen our understanding of blockchain as a means to share data, paving the way for much needed innovation in the energy industry. The implementation of such a solution in other countries may face with the lack of energy data.

Estonia provided the ideal infrastructure for this type of testing as the country has 100% smart meter coverage and a data sharing platform called Estfeed. Estfeed enables consumers to download and share their data with any persons or companies whom they choose, as well as anonymous and aggregated data, such as that used for WePower’s pilot. This gives a data base big and complete enough for operating a distributed ledger.

Through testing real data, WePower has been able to build a fundamental new technology layer for the energy industry. This new technology layer will allow for both software and hardware innovation that will bring much needed change to the way energy markets operate — especially when it comes to developing models for more effective integration of distributed green energy with the grid, enabling new interactions between different partners and breaking silos between energy market participants. The project is believed to rise the share of green energy in energy consumption as it will enable consumers to purchase green energy directly from producers, with information stored on the blockchain which will guarantee power generation with the usage of renewables, not with the usage of fossil fuels.

Taavi Veskimägi
Elering
Future clean and secure energy will depend on innovative solutions and consumer empowerment. However, a major barrier in most countries is lack of access to energy data. Estfeed unlocks data access within Estonia and we are now working towards doing this on an international level. WePower’s proof of concept is important for showing how data access leads to innovation.

A fully decentralised application for large scale autonomous usage is not yet feasible for WePower’s purposes.

One of the key findings was that Ethereum is mature enough to accommodate contracts with multi-year terms. However, WePower remarks, while Ethereum is currently one of the most mature blockchain solutions supporting smart contracts, a fully decentralised application for large scale autonomous usage is not yet feasible for WePower’s purposes. For now, a hybrid solution will be utilised while monitoring the rapid development of Ethereum as well as other blockchain technologies. Besides that, the company plans to test a number of different blockchains to find the best fit for large scale infrastructure projects.

It’s not clear yet if scaling up the project will actually work.

If the pilot is successful and lots of energy is traded using the platform, then the blockchain project might be scaled up, potentially to create an energy exchange or to facilitate peer-to-peer trading. It’s not clear, though, that scaling up will actually work, as it would mean using blockchain technology for data that is flowing at high speed and in huge volume. One concern is transaction capacity: the public Ethereum blockchain used by WePower applies the so-called proof-of-work (PoW) approach that requires a lot of energy and computing power that only professional Ethereum miners can provide (although Ethereum may at some point switch to the environmentally-friendlier and easier “proof-of-stake” approach), which means the transaction capacity might be limited, becoming a hurdle for the project to be expanded to a full commercial deployment. [businesswire.com, wired.co.uk]